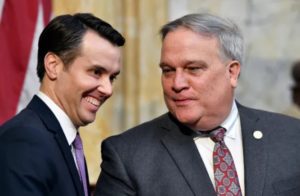 Senate Bill 1, from Sen. Danny Carroll, R-Paducah, bans any “sanctuary policy” by police or public agencies in Kentucky. It also requires almost all public employees in the state to use “their best efforts” to support enforcement of federal immigration law.

Stivers specifically cited The Courier Journal’s investigation of El Mencho, the kingpin of CJNG, a deadly Mexican drug cartel, as a reason for the legislation receiving top billing.

“There are individuals coming into our country that are using our resources, our educational systems and our health care systems that are not contributing in any way,” Stivers said. “So how do we deprive our citizens and individuals who have immigrated here legally … for people who have not followed the law and on many occasions are illegal to the extent that they are breaking the law and helping in the trafficking of drugs?”

SB 1 is virtually identical to the bill Carroll prefiled Dec. 9, with one key change: It adds Kentucky’s public universities and colleges to the list of entities prohibited from adopting or enforcing sanctuary policies, which would bar them from granting “illegal immigrants” the right to a lawful presence or status.

Asked whether SB 1 would allow those without legal immigration status to still enroll in public colleges and universities, Stivers answered: “They should not be.”

Stivers added that such an enrollment ban should extend to “Dreamers” — a moniker for those brought into the country illegally as minors, many of whom have been able to stay and work legally since the Deferred Action for Childhood Arrivals program was adopted in 2012.

“That is also part of it, because individuals who came here illegally — one way or another — they should not be able to attain the status of a person who is here legally, either by birth or by the appropriate naturalization process,” Stivers said.

Immigration advocates and the American Civil Liberties Union of Kentucky have warned the bill would apply to groups that get at least 25% of their funds from the government, thus applying to employees of domestic violence and sexual assault centers.