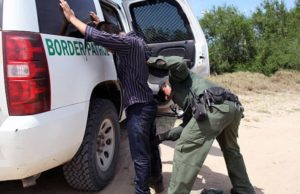 An Arizona congressman known for his hard-line views on immigration called on the U.S. Capitol Police to arrest any undocumented immigrants who attend President Trump’s State of the Union address, after at least two dozen Democratic lawmakers said they would bring “dreamers” as guests to Tuesday night’s speech.

Rep. Paul A. Gosar (R-Ariz.) asked the Capitol Police and Attorney General Jeff Sessions to “consider checking identification . . . and arresting any illegal aliens in attendance” as well as detaining anyone using “fraudulent social security numbers and identification to pass through security.” His tweets on the subject caused a wave of online outrage roughly seven hours before the speech was scheduled to begin.

The young people protected by the Deferred Action for Childhood Arrivals (DACA) program would not be affected by an ID check because they have social security numbers and legal work status, according to aides who helped organize their attendance. Some lawmakers might have invited immigrants without these documents to attend the speech, said the aides, who were granted anonymity because they were not authorized to speak about the legal status of some guests.

“Of all the places where the Rule of Law needs to be enforced, it should be in the hallowed halls of Congress,” Gosar wrote on Twitter. “Any illegal aliens attempting to go through security, under any pretext of invitation or otherwise, should be arrested and deported.”

House Minority Leader Nancy Pelosi (D-Calif.), who is among the Democratic lawmakers who plan to bring a DACA recipient to the speech, said Gosar’s comments were “outside the circle of decency.”

“Our members all profess to be people of faith, that we believe that we’re all children of God and that we have a spark of divinity in us. For him to make that statement is to dishonor the God who made us. It’s just shameful,” she told reporters.

Rep. Michelle Lujan Grisham (D-N.M.), chairman of the Congressional Hispanic Caucus, said that lawmakers “have constitutional protections to do our jobs for every constituent that we have.”

“I find it personally offensive that that member of Congress is interfering with my ability to do my job,” she said.