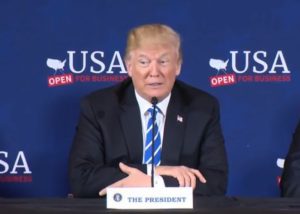 As lawmakers in the House and Senate return to Capitol Hill after a two-week Easter break, they arrive back at the U.S. Capitol this week facing an increasingly frustrated occupant of the White House, as President Donald Trump has made clear in recent days that he wants action from the Congress on immigration and other issues, and wants it done now.

“We have immigration laws that are laughed at by everybody,” the President told reporters last week at the White House. “And it’s got to be changed.”

But while Mr. Trump has repeatedly pressed for action in Congress, the votes simply aren’t there in either the House or Senate for major immigration changes, as shown by a series of March votes in the Senate related to the DACA program.

Here’s what to look for as lawmakers return:

1. Trump wants action on immigration. While lawmakers were out of town, the President was venting his frustration about the lack of action on illegal immigration, demanding that Congress close loopholes which he says make it difficult to deport people who get into the U.S. illegally. “We have horrible, horrible, and very unsafe laws,” the President said, as aides told reporters that a new legislative package of immigration changes would be sent to Capitol Hill. But the calculus remains the same in Congress – the get-tough measures backed by the President don’t have a majority in either the House or Senate. Both parties should expect to hear more from the President on this issue, but it’s not clear that will result in any kind of new laws.

2. Will the House even vote on a Trump immigration plan? Republicans have talked for months about voting on a plan related to immigration, but the GOP hasn’t been able to put together anything so far which can get enough votes to be passed – a common theme for the GOP in recent years. The current Republican plan from Rep. Bob Goodlatte (R-VA) would incorporate many measures to tighten immigration laws which are backed by the President, while providing a temporary, renewable legal status for DACA illegal immigrant “Dreamers.” That DACA provision isn’t acceptable for a number of more moderate GOP lawmakers, and so Republicans can talk about immigration, but have no vote scheduled on anything at this point. That’s going to get more notice as the President makes more noise on the subject.