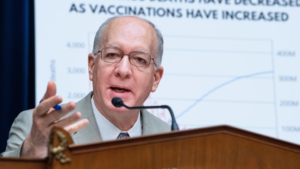 As Congress negotiates a sweeping bill aimed at making the U.S. more competitive with China, House Democrats and advocates are pushing for immigration provisions that would attract high-skilled workers and boost critical sectors of the economy.

The House passed legislation with several immigration provisions, including one that would allow more immigrants who have a doctorate degree in science, technology, engineering or math to get green cards to live and work in the U.S.

The Senate passed a much slimmer version of the bill that does not include those provisions — one of the differences that dozens of conferees from both chambers will hammer out in the coming months.

“We’re a beacon in the world for the best and the brightest, creative innovative people and collaborative people,” said Democratic Rep. Deborah K. Ross, who represents North Carolina’s Research Triangle. “And so, if we are no longer a desired destination for them, they will go somewhere else.”

But their efforts run up against the reality of an immigration system that hasn’t changed in decades and deep partisan divides that threaten the possibility of any action.

Some Republicans want to keep the China competition bill as narrowly focused as possible to ensure it can move quickly at a time when partisan divisions over immigration are at an all-time high. And many in the party are unwilling to make any changes to immigration law in the absence of tougher border security.

During the first official conference meeting on the China competition bill on Thursday, Iowa Republican Charles E. Grassley said he would oppose the inclusion of the House immigration provisions in the final bill.