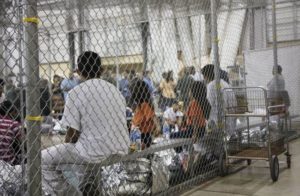 PHOENIX (AP) — The Honduran mother said she felt repeatedly pressured to sign documents she wasn’t given time to read, so she lashed out at an immigration officer, telling him it shouldn’t be this hard to get her son back.

The officer put his hands in a motion imitating choking someone and told her that’s what he’d do to her if she were his wife, the woman said in an interview Thursday. She spoke to The Associated Press on condition of anonymity over fears about her safety.

“I felt so horrible because of so many things they told us, that they were gonna deport us, that our kids were gonna stay here,” she said of her experience after being separated from her son at the border this spring.

A complaint filed against the Department of Homeland Security on Thursday alleges many parents were coerced into signing paperwork they didn’t understand and that they were verbally and emotionally abused while detained and away from their children.

In some of the cases, parents gave away rights to be reunited with their children when the non-English speaking mothers and fathers signed documents in English they could not read, according to the complaint provided to the AP before it was filed with the Department of Homeland Security.

In other examples, parents who had been reunited were threatened with another separation if they didn’t agree to be deported with their children, the complaint said.

All of them said they weren’t allowed to ask what would happen if they signed the form.

The U.S. government separated more than 2,500 children from their parents this year as the Trump administration adopted a “zero-tolerance” policy requiring anyone who crossed the border illegally to be prosecuted. That resulted in parents who had to go to federal court to face criminal misdemeanor charges of illegal entry to be separated from their children, often for months.

A federal judge overseeing a lawsuit against the government gave authorities until July 26 to reunite all families, although over 300 parents who were deported to their home countries have yet to be reunited with their children.