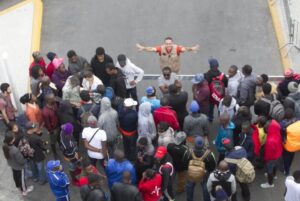 The device, known as The WRAP, placed men from Cameroon and Uganda in stress positions for hours, complaint says.

When Godswill entered the San Ysidro Port of Entry in the summer of 2019 to request asylum from his home country of Cameroon, he thought he had finally reached a safe haven.

But what he says happened in U.S. custody, particularly as he was being deported back to Cameroon, left him feeling betrayed.

Before Immigration and Customs Enforcement officials put him on a deportation flight in November 2020, they cinched him into a restraining device called The WRAP, which held his legs tightly straight and together while pulling his head and chest down towards his knees at a sharp angle, Godswill said. Because of his vulnerable situation, he asked to be identified only as the pseudonym given to him in the complaint.

“It’s something I would never wish for my enemy,” Godswill said in an interview. “It is humiliating. It is demoralizing. It is a high degree of torture.”

Godswill is now one of three Cameroonian men who have come forward in a complaint filed Wednesday with the Department of Homeland Security Office of Civil Rights and Civil Liberties about the harm that ICE’s use of The WRAP caused them.

ICE did not respond to a request for comment about the complaint.

What happened to the three men and to others who were too scared to come forward publicly, the complaint says, falls under the definition of torture from the United Nations Convention Against Torture, which the United States signed in 1988.

The complaint also raises the question of whether the treatment was motivated by racism. So far, the only deportees that advocates have identified as having experienced The WRAP were Black asylum seekers from African countries.