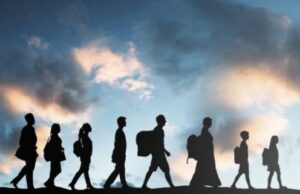 In the 2020 presidential campaign, immigration policy is a point of differentiation between presidential incumbent Donald Trump and former Vice President Joe Biden. The candidates’ views of immigration differ largely because of the assumptions being made about the contributions that immigrants make to the economy. While President Trump’s policies reflect a view that immigrants harm native-born workers, Joe Biden’s proposals assume that immigrants make economic contributions. These basic assumptions lead to drastically different policies. In his almost four years in office, President Trump has cracked down on undocumented immigrants and reshaped the immigration system, while claiming that his measures support the workers and the U.S. economy as a whole. Biden’s plan for immigration consists of two major points: dismantle the policies of the Trump Administration and reenact the Obama-era policies, which would include giving the estimated 11 million undocumented immigrants a path to citizenship. This analysis summarizes the immigration policies during the Trump Administration’s first term, outlines his second-term goals, and identifies the areas that a Biden Administration could target and reverse regarding an immigration agenda.

The Principles of Each Candidate

During his first term in office, President Trump created several policies that stem the flow of immigrants into the United States. Where the Trump Administration focuses on deregulation in most areas, immigration is one area that has seen major new regulation, including over 400 executive orders, in the past four years.