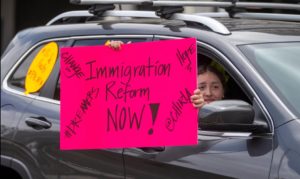 In light of the recent Supreme Court ruling about DACA, many eyes are now fixed again on our nation’s deeply flawed immigration system.

Did you know there is one small change that Congress could make right now that would make it possible for millions of undocumented immigrants to legally fix their status? This would be eliminating the three- and 10-year bars to reentry put in place by the Illegal Immigration Reform and Immigrant Responsibility Act (IIRIRA) of 1996.

It’s beyond time to acknowledge that these bars just don’t work and need to be eliminated. This should be an easy bipartisan fix. Former Republican Rep. Raul Labrador, R-Idaho, who worked for 15 years as an immigration attorney, said of the bars: “If we get rid of what we call ‘the bars’ … we could fix the problem for about 25 percent of the people that are here illegally. And we would do it through the proper legal system.”

To illustrate how these bars work and why they are so problematic, let us present you with a real-life case. Names have been changed.

Isabel came to the United States with her parents and younger sisters in 1993 when she was 14 years old. Once here, weak with relief for having escaped the dangerous, gang-ridden area of Mexico where they had lived and determined to give their daughters a better life, her parents sought the services of a “notario” in California to whom they paid a great deal of money to become “legal”— or so they thought.

It was a scam and, in 1995, the family was placed in deportation proceedings and were eventually ordered deported. At that point, fearful for the fate of their daughters should they be forced to return to Mexico, the family moved into the shadows and remained in the U.S.