Home Politics Column: This Is Not About Immigration 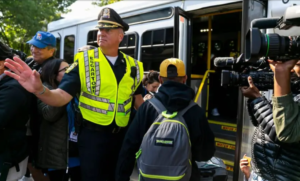 Immigration is the last thing this is about.

If conservatives really wanted to fix immigration, they could have done so years ago. Certainly, the broad outlines of a workable overhaul have long been obvious: a combination of hardened border security, a guest-worker program, streamlining the process for immigration and creating a pathway to citizenship for immigrants here illegally.

In fact, President Bush offered a plan roughly along those lines back in 2006. “I know this is an emotional debate,” he pleaded to his fellow Republicans. “But one thing we cannot lose sight of is that we’re talking about human beings, decent human beings that need to be treated with respect.”

Republican senators were unmoved, and the plan died in Congress. As for treating immigrants with respect, the GOP has made it a point of pride to do the opposite, from caging them like animals to taking their children away. Now comes last week’s chicanery from Florida Gov. Ron DeSantis. On his orders, 48 immigrants — most, if not all, from Venezuela; most, if not all, seeking asylum — were approached in tiny Eagle Pass, Texas, by a woman they say duped them into boarding two chartered planes with promises of being flown to where they would find jobs and immigration assistance.

They were instead taken to Martha’s Vineyard where they wound up wandering about with child-appropriate maps they had been issued in Texas. This was DeSantis’ take on a stunt lately favored by the Republican governors of Arizona and Texas. They’d been putting migrants on buses, but he upped the ante by chartering planes at a cost to taxpayers of $615,000, or $12,812 per person. At this writing, a commercial flight from San Antonio to the Vineyard is $329. Just so you know.

And mind you, Florida has no international land border. But apparently, this stunt was too tempting for DeSantis to allow a little geography to get in his way.