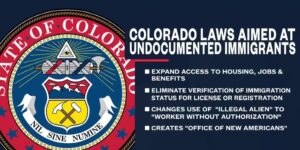 Supporters say the new laws will make the state a more equitable place. Opponents argue they will siphon money and services from other residents.

In the past few months, Colorado has passed a series of laws aimed at supporting and protecting undocumented people after the pandemic revealed wide disparities and exacerbated inequalities in Colorado and elsewhere.

Gov. Jared Polis has signed into law measures aimed at expanding access to housing, jobs and state benefits to undocumented immigrants. Supporters say the laws will make the state a more equitable place. Opponents argue the measures will siphon money and services from other residents.

“We can’t just sit around waiting for the federal government to fix our broken immigration system,” Polis said at a signing ceremony for a law eliminating the requirement that regulatory agencies verify a person’s immigration status before issuing or renewing a license, certificate or registration. “Colorado needs the contributions from everybody in our state with all different talents and skills to have good jobs and work and employ their abilities to make us all better off.”

The 180,000 undocumented immigrants who live in Colorado make up about 3 percent of the state’s population. Nationwide, more than 10.5 million people live in the U.S. unauthorized, according to the Pew Research Center.

Historically, they have been locked out of certain opportunities afforded to people with U.S. citizenship, including access to everything from driver’s licenses to public housing.

Among the new laws is one that removes the phrase “illegal alien” from state documents and replaces it with “worker without authorization” and another that makes it criminal extortion to threaten to report a person’s immigration status to get them to perform or refrain from performing a lawful act.

The legislature also passed a measure to create the Office of New Americans, which will serve as a destination for policy ideas and refugee and immigrant programs if the bill is signed into law.