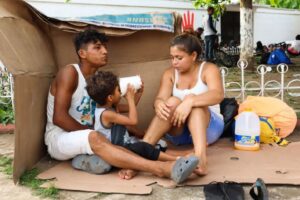 WASHINGTON — Catholic Legal Immigration Network Inc. is calling on the Biden administration to stop efforts to restart implementation of a Trump-era immigration policy that keeps would-be asylum-seekers to the U.S. in Mexico.

In a Nov. 18 news release, CLINIC says administration officials should “focus all energy and resources on restoring a welcoming border for all who come here looking for safety and security,” and not to seek to restart the Migrant Protection Protocols, popularly called MPP or the “Remain in Mexico” policy, even though a judge has told them to do so.

CLINIC’s main argument is that “meaningful access to counsel, justice and due process under MPP is categorically impossible.”

Under the policy, migrants seeking asylum must wait on the Mexico side of the U.S. border until their cases can be heard by U.S. immigration courts. Though the Biden administration has tried to end MPP, in August a judge of the U.S. District Court for the Northern District of Texas told administration officials to continue complying with the policy, saying they had not ended it properly. The U.S. Supreme Court upheld the judge’s ruling.

But immigration advocates such as CLINIC said the policy puts people seeking asylum in dangerous conditions.

“Under MPP, asylum-seekers, people who have arrived at the U.S. border fleeing for their lives, are forced to stay in Mexico in deplorable and inhumane conditions,” CLINIC said in the news release. “They have no access to the resources needed to meaningfully engage with legal representation in the United States.

The release related an instance in which a CLINIC attorney told of the journey of a woman affected by MPP and how she was forced to live on the streets and was kidnapped, tortured and raped on the Mexico side while she waited for her asylum case be heard.