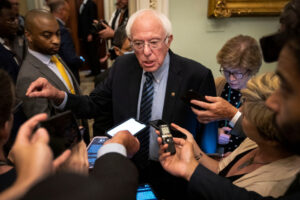 The policy details unveiled Wednesday are a meaningful spotlight on the scope of the party’s spending ambitions.

Senate Democrats’ $3.5 trillion spending package will unleash a gusher of hundreds of billions of dollars for progressive priorities, from climate programs to an expansion of Medicare to promised green cards for some undocumented immigrants, according to new details released on Wednesday.

Majority Leader Chuck Schumer, Budget Chair Bernie Sanders (I-Vt.) and Sen. Mark Warner (D-Va.), a moderate on the budget panel, briefed the rest of the Democratic caucus during lunch with President Joe Biden in the Capitol on Wednesday. They discussed some of the biggest components of the planned spending bill that Democrats aim to pass without Republican support using the budget process. That filibuster-proof process starts with a budget resolution, which Senate Democrats have agreed to set at a ceiling of $3.5 trillion.

And while that resolution’s text is still forthcoming, once it arrives it will have few specifics of how Democrats will turn Biden’s priorities into legislation. That makes the policy highlights unveiled Wednesday, as vague as they are, a meaningful spotlight on the scope of the party’s spending ambitions, which would be financed by a shaky combination of tax reform, health savings like lowering prescription drug costs, and the assumption of long-term economic growth.

“Let me be clear — this is a huge bill. This is a complicated bill. This is a transformative bill,” Sanders told reporters after lunch. “In some cases, it doesn’t provide all the funding that I would like right now.”

But with 50 Democrats in the upper chamber and no votes to lose, “compromises have to be made,” Sanders said.

The proposal would expand Medicare to cover dental, vision and hearing services for seniors. It would also fund health care for about 2 million people living in red states that have refused to expand Medicaid. Both provisions were major priorities for liberals, who had originally pushed for trillions of dollars more in a total package.