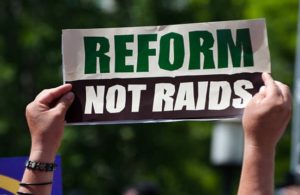 Some Evangelical Christian leaders and advocates in Massachusetts are fasting to bring attention to immigration issues affecting members of their congregations.

BOSTON (AP) — Some Evangelical Christian leaders and advocates are fasting to bring attention to immigration issues affecting members of their congregations.

Advocacy and legal services group Agencia ALPHA worked with the group of Hispanic churches to start a 40-day period of fasting on Wednesday. The pastors and their congregations will practice different forms of fasting, some abstaining from meat and subsisting on fruits, nuts and occasionally fish, others maybe eating only vegetables in honor of a biblical figure who survived captivity on that diet.

The Rev. Jose Rodriguez, of the Waltham Worship Christian Center, compared the stories of immigrants from his parish who are in the U.S. illegally with those of Jews persecuted in Egypt.

“People leave their lands for reasons that are very frightening,” he said, referring to violence in Central America that pushed many to seek refuge in the U.S.

Rodriguez said he hopes that the prayers push members of Congress to “have a heart.”

Pastors have been holding short home services to help members of their congregations who are in the U.S. illegally and are afraid of being detained while leaving their homes.

The Rev. Sergio Perez, president of a Hispanic fellowship of Christian pastors, said during 29 years of leading his 700-member parish in Weymouth he’s witnessed the difficulties immigrant families face.

“For them to go to work and make it safely is a real blessing,” he said.

Perez said he has known worshippers detained by local police and “handed over” to federal immigration authorities.

“That fear … that’s why for me, as a pastor, I need to represent them,” he said.

The effort is part of a Massachusetts-based campaign called Immigrants Make America Strong, which seeks federal reform to support immigrants in the country illegally.