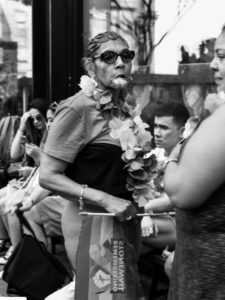 The fight for equal rights for the LGBT+ community is largely discussed from a Western perspective and past the month of June, the focus turns back to the status quo. Yet as the viewfinder widens, as does the deficiency of human decency intersect – the U.S. State Department denies citizenship to the children of same-sex American couples born abroad, mirroring the deplorable acts on the US Southern border from those seeking refuge. As gay and trans people alike flee their homes abroad for fear of violence, the rising number of deaths of trans women stateside grows larger and trans people are banned from serving in the military and protecting the ones they love. Nonprofit organizations like Immigration Equality, seek to bridge these gaps by protecting families and empowering immigrants through the protections of citizenship, an initiative that HEROES is pushing to heighten awareness for. On the 50th anniversary of the Stonewall riots and the eve of America’s independence, photographer and model Sophie Koella captured the joyful World Pride Day scene for Models.com including the stories of LGBT+ migrants choosing refuge in the United States for all.