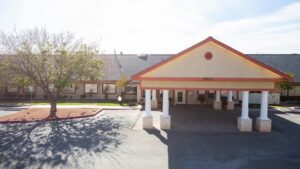 U.S. Customs and Border Protection is seeking to build a second, centralized facility in El Paso to process migrants arriving at the border.

The proposed “Central Processing Center” would be the second such facility in El Paso. They represent the Department of Homeland Security’s latest approach to temporarily detaining and processing migrants who cross the U.S.-Mexico border without permission.

CBP in December asked the city of El Paso to sell 60 acres belonging to the water authority in Northeast with an assessed value of about $431,000, according to a Dec. 11, 2020, land sale request obtained by the El Paso Times.

The site, located off Highway 54, would be “for a Central Processing Facility, El Paso Sector, U.S. Border Patrol,” according to the document.

CBP El Paso spokesman Landon Hutchens confirmed that the agency “is in the process of acquiring land for the facility” with funds appropriated in fiscal 2019 and said the project “is currently in the design phase.”

He declined to answer questions about the facility’s capacity or which migrants would be held there.

A July 2020 environmental assessment for a new “Central Processing Center” evaluated plans for a facility large enough “to accommodate 965 detainees and a staff of 200 for the processing and temporary holding of migrants who have crossed into the U.S.”

“The USBP El Paso Sector does not have the processing space to hold and process the influx of migrants that enter the U.S. on a daily basis,” according to the environmental assessment. The facility would be “for the purpose of providing immediate, safe and secure processing and detention space for migrant families and unaccompanied children in the USBP El Paso Sector.”

CBP’s own standards dictate that the agency shouldn’t hold migrants longer than 72 hours and that the additional processing center “would support CBP’s effort to comply with (the standards) and process migrants in an efficient manner.”