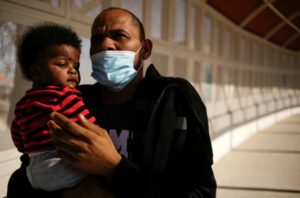 It was the 35th such deportation flight since US President Joe Biden took office, sending an estimated 2,000 Haitian asylum seekers, including families, pregnant women and children, back to the rampant gang violence and systemic poverty from which they fled.

Less than 24 hours later, armed gunmen stormed President Jovenel Moise’s home in the Haitian capital, killing him and injuring his wife, and sending shockwaves across the Caribbean nation and around the world.

Back in the US, the deadly attack raised fresh concerns from Haitian community advocates who long before Moise’s killing had demanded an end to US deportations of migrants and asylum seekers to Haiti.

“We are calling on the Biden administration to put a moratorium on all deportations and to release Haitian asylum seekers and refugees held in detention in light of this crisis,” said Marleine Bastien, executive director of the Family Action Network, an advocacy and social service agency that assists Haitians in South Florida.

“We have been asking for months now,” Bastien told Al Jazeera.

Immigration advocates say no US deportation flights have landed in Haiti since the country was thrust into further turmoil by Moise’s assassination last week, as the Haitian constitution is unclear over who should take over and at least three leaders hold competing leadership claims.

But they are increasingly concerned by the deportation of Haitian asylum seekers arriving at the US-Mexico border as well as their continued detention in the US under the public health rule known as Title 42.

“It is simply unacceptable for them to be held in cages instead of being released to be united with their families and community members,” said Guerline Jozef from Haitian Bridge Alliance, a US-based coalition of Haitian non-profit organisations.