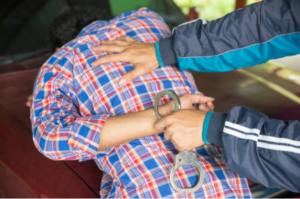 The daughter of a Los Angeles man who was detained Sunday outside his home by U.S. Immigration and Customs Enforcement agents spoke out this week about his treatment and the immigration policies that appear to target longtime, law-abiding residents.

Jose Luis Garcia, 62, was watering his lawn and having his morning coffee outside his home in the Arleta neighborhood of San Fernando Valley when ICE agents put him in handcuffs and detained him, according to his daughter, Natalie Garcia.

The arrest came as a shock to the 32-year-old Garcia, who said that her father is a law-abiding, legal permanent resident who came to the United States nearly 50 years ago when he was 13 years old.

He attended Van Nuys High School, and raised his family in Glendale, she said.

Garcia said she was woken up at about 7 a.m. Sunday by the sound of her father yelling her name. She initially thought he was experiencing a medical emergency, but when she came out of the house, she saw eight agents who she did not yet know were from ICE, arresting her father.

Garcia tried to get more information and asked to see the arrest warrant and if they had read him his rights. She said the agents responded rudely, did not answer most of her questions, and told her they did not have to show her the warrant. They told her that it was not a criminal warrant, but an administrative one.

“I didn’t know they were ICE at that moment,” Garcia said. “It just happened so fast and there were so many of them. I was so confused.”

After the agents had left with her father, it was only then that she saw the coffee cup that he had dropped when he was being arrested. She then looked down at the card the agents had given her and finally realized the agents were from ICE.