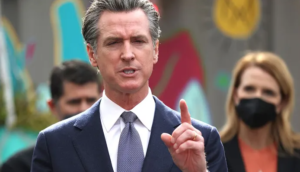 Illegal immigrants can already acquire a driver’s license in California, but the latest bill opens IDs up for everyone

California residents can now acquire a state ID regardless of immigration status under a law signed by Gov. Gavin Newsom on Friday.

“We’re a state of refuge – a majority-minority state, where 27 percent of us are immigrants,” Newsom said after signing the legislation. “That’s why I’m proud to announce the signing of today’s bills to further support our immigrant community, which makes our state stronger every single day.”

A law passed in 2013 allows California residents to obtain a driver’s license, but the bill that was signed Friday will allow non-driving residents to acquire a government-issued ID, even if they are not a legal immigrant.

About 22% of California’s nearly 11 million immigrants are in the United States illegally, according to the Public Policy Institute of California.

One day after signing the bill, Newsom traveled to Texas, where he targeted Texas Gov. Greg Abbott and Florida Gov. Ron DeSantis for bussing and flying migrants to blue cities, and despite California’s 2017 ban on official travel to the Lone Star State.

“The one thing that he did is he broke with precedent, any precedent of decency and honor, his lack of character on display,” Newsom said at the Texas Tribune Festival in Austin about DeSantis.

“He comes into another state – your state – to try to find pawns in a political game, rounds them up, sends them to an island, and then fundraises off it. What does that say about his character, and the character of the Republican Party that celebrated that act of cruelty and dehumanization?”