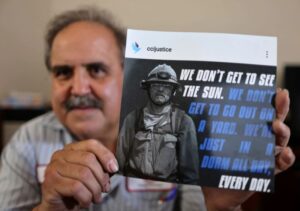 SANTA ANA, Calif., Sept 7 (Reuters) – Leonel Sanchez thought he was about to go home to his family after serving three-and-a-half years for assault and other crimes in California, saying he felt redeemed after he started reading the Bible, attending Alcoholics Anonymous and even fighting wildfires as a prisoner.

Instead of walking free, he became one of the 1,500 foreign-born California prisoners who earn their release each year, only to be transferred to federal detention and told they may be kicked out of the country. He is in U.S. Immigration and Customs Enforcement (ICE) custody, likely to be deported to Mexico, a country he left at age 10 and where he has no friends or known relatives.

In an atmosphere still charged by Trump-era rhetoric linking immigration and violent crime, some Californians may have little sympathy for the foreign-born who can be deported because of felony convictions. But advocates for people like Sanchez question whether it serves justice to punish them a second time or send them away regardless of their individual circumstances, the rehabilitation they sought on the inside, or the conditions in their homelands.

A proposal to bar California prison authorities from handing people over to ICE is making its way to the governor’s desk. The so-called Vision Act, which has been criticized by law enforcement groups, would even ban identifying those eligible for deportation.

Sanchez, 51, had his state sentence reduced because of good behavior that also led to a prized assignment for incarcerated people – fighting wildfires.

About a month before his December 2019 release date, Sanchez learned he would not soon see his grandchildren and restart his old job as an auto mechanic.

“I thought I was going to walk away a free man because of what I was doing. I was contributing to the communities, you know, helping. Fighting fires, saving property and animals, people’s homes and stuff,” Sanchez said by telephone from ICE detention in the Yuba County Jail.