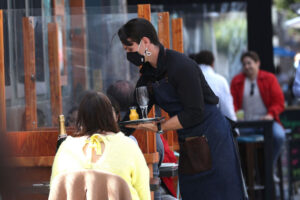 Businesses depending on a summer boom in tourists, beachgoers and other seasonal clientele to pull them out of the pandemic slump are struggling to bring enough foreign workers to the U.S., holding them back from a recovery.

Employers in tourist areas that usually rely on temporary workers from abroad during the surge in seasonal demand say travel restrictions, closed consulates and a limited pool of H-2B seasonal visas are making it even harder to resume operations, just as relaxed Covid-19 strictures and masking rules have allowed for full reopenings in most states.

The squeeze has businesses groups once again lobbying Congress to expand the number of non-immigrant worker visas available, which they warn is essential to the economic recovery this time around.

After absorbing nearly half of the destruction caused by the pandemic shutdowns, the leisure and hospitality industry is still in a deep hole, down 2.5 million jobs from early last year.

“There simply are not enough workers to fill those slots,” said Lynn Minges, president and CEO of the North Carolina Restaurant and Lodging Association, who estimated the industry has about 70,000 openings in the state.
“And there are a number of factors that contribute to that but obviously one of those is the challenge in getting immigrant workers to fill some of the jobs.”

Restaurants and hotels are reducing opening hours, closing for certain days each week and limiting their guests due to a lack of staff, Minges added, which is also resulting in fatigue and burnout among workers who have to pick up the slack.

Robert Melvin, director of government affairs for the The Virginia Restaurant, Lodging & Travel Association, said the lack of access to foreign workers is “really holding everyone back in a big way” in the commonwealth.