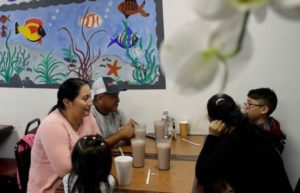 Guatemalan bakeries, Honduran restaurants and Salvadoran markets are joining an already ethnically diverse mix of businesses in downtown Chelsea, a tiny industrial city across the Mystic River from Boston.

Among them is Catracho’s, a modest Honduran eatery recently purchased by Johanna Mateo, who was born in New York and raised in Honduras until she was 12, when she joined her older sister in Chelsea.

“I always wanted to reinvest in Chelsea,” said Mateo, 27, who plans to expand to a vacant storefront next door. “I like the roots it’s set within the Latin American community, and I want to keep it that way.”

Chelsea (population, 40,000) is a microcosm of broader changes sweeping the United States, as the number of Central American immigrants increases and the number of Mexican immigrants decreases. Mexico generated one of the largest immigration waves in U.S. history, starting in 1965 and lasting well into this century, until an improved Mexican economy and lower birthrates helped reverse the trend. Now, more immigrants are fleeing poverty and violence in Central America’s Northern Triangle.

The dynamic is playing out at the state level, said Jeffrey Passel, co-author of the report. Only five states saw statistically significant increases from 2007 to 2017, led by Massachusetts and followed by Maryland. Both are magnets for Central Americans. California, with its large numbers of Mexicans, and other immigrant-heavy states such as Florida, Illinois, New Jersey and New York have fewer people in the country illegally.

The changes extend to immigrants regardless of legal status.