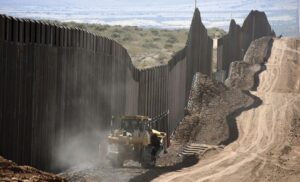 The president-elect stated emphatically during campaign stops in Texas that “not one more foot” of wall will be built under his administration and that federal lawsuits to seize Rio Grande border land—almost all privately owned—will be dismissed.

“We want that in concrete terms,” Ricardo de Anda, a Laredo, Texas attorney and anti-wall activist told ENR. There are 221 miles of barrier under construction, says U.S. Customs and Border Protection, a U.S. Dept. of Homeland Security unit.

A federal judge ruled Nov. 15 that acting Homeland Security Secretary Chad Wolf was not lawfully serving as secretary, which De Anda says negates his authority to justify wall building by declaring the Texas border a “high priority” security risk. “We made the claim months ago that Wolf did not have authority to issue a directive to build the wall here,” the attorney says.

About $10 billion in border wall construction contracts have been issued, but they can be terminated for convenience. Some wall critics worry that the stipulation was removed from border wall contracts, but the government has an “inherent right” to terminate for convenience whether or not it is expressly written in the contract, says the Congressional Research service.

In July, Homeland Security’s Inspector General said the border patrol agency did not complete required analysis of alternatives to identify the best solution for portions of the wall, which some observers say could give more weight to possible contract cancellations.

By Bruce Buckley and Mary B. Powers for ENR
Read Full Article HERE