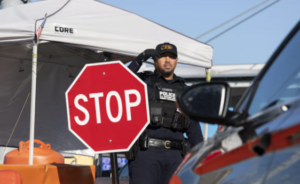 On Tuesday morning, drivers in Tijuana heading to the United States yelled, jeered and gave thumbs-down gestures as they passed a newly installed speed bump and checkpoint staffed by Mexican immigration officials.

They were reacting to the traffic chaos caused by the checkpoint — just yards from the San Ysidro Port of Entry — on its first day of operation.

Drivers in the SENTRI, or trusted-traveler lane, who normally zip by other border crossers reported waits close to two hours during the morning commute.

“It doesn’t work,” yelled one woman in a Black Nissan in Spanish as she passed the checkpoint. “There’s too much traffic.”

Mexican officials last week said the new inspection area was a way for Mexican immigration officials to check some northbound travelers for the appropriate crossing documents before they reach the official port of entry staffed by U.S. Customs and Border Protection. For more than a year, CBP officers have been doing that task, making initial document checks at the physical border line before drivers approach the port of entry booths as a way to prevent asylum seekers from crossing onto U.S. soil in cars.

Mexican officials said they hope by staffing an initial document inspection point themselves, it will free up CBP officers to open more car lane booths and reduce wait times overall for authorized travelers. The U.S. consul general in Tijuana was present at the meeting where officials first announced the program. However, CBP has not made any public affirmation of such an agreement.

On Tuesday, about 10 U.S. CBP officers continued to do their own initial checks, standing beneath white tents at the border line.

“We can say that this is a Government of Mexico program,” CBP told the Union-Tribune of the new Mexican checkpoint. “We have no further comment on this program.”