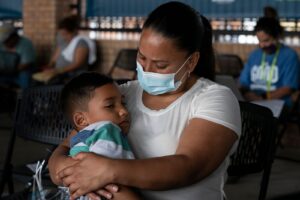 The Biden administration and the Mexican government have made the situation at the border so confusing that even seasoned experts can’t always determine who is allowed in and who isn’t. That may be contributing to the high number of border crossings.

No matter how hard he tried, Jonatan Garcia said, he couldn’t find steady work in Guatemala. He dabbled in construction, and on some days picked beans, after losing his sales job at a TV station a few weeks after the pandemic shuttered businesses and further stifled employment in his country.

Desperation quickly mounted for Garcia. He struggled to make enough money to provide food for his wife and two small children, and they faced eviction from the three-room house they rented in the mostly indigenous and impoverished rural state of Baja Verapaz.

Then, Garcia said, smugglers falsely told him that President Joe Biden had signaled during a television appearance that migrants would be allowed to enter the United States. The new administration has been trying to combat such misinformation as it seeks to rein in the influx of migrants at the southern border of the U.S.

Garcia borrowed nearly $7,000 from a friend and, aided by a smuggler, traveled to Texas with his 6-year-old son. He left behind his wife and baby while he searched for stable employment.

Garcia and his son were among a record-setting number of migrants who were detained while attempting to enter the country at the U.S.-Mexico border in March and April under confounding policies that have turned the immigration process into a game of roulette. While not rising as rapidly as they had in the months immediately previous, border detentions reached a 21-year high after increasing again in April, according to federal statistics released this week.

By Lomi Kriel for THE HILL
Read Full Article HERE