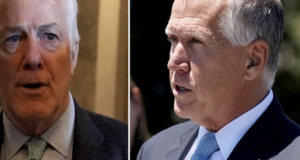 When a small group of senators met recently to kick-start the latest iteration of immigration negotiations, Sen. John Cornyn (R-Texas), a member of the group, laid out his starting line: the border.

“I … said we can’t do anything until we deal with the border crisis. And so that’s, until we kind of get over that obstacle, I think it’s hard to get public support for doing these other things where there is a lot of common ground,” Cornyn told The Hill in recounting his message.

What the policy should be for processing migrants arriving at the southern border has been a long-running sticking point in any attempts on Capitol Hill to strike a deal on immigration, a perennial legislative white whale.

But the latest round of negotiations is dovetailing with a larger political fight over the Biden administration’s decision to rescind Title 42 — a Trump-era pandemic public health policy that allows for the rapid expulsion of migrants at the border and blocks them from seeking asylum — throwing an early, extra tripwire into an already uphill legislative attempt.

Sen. Thom Tillis (R-N.C.), another member of the group, agreed with Cornyn, saying that they view the border as “foundational” to negotiations.

“I don’t think there’s any way that we could get consensus if we’re not addressing the border crossing issue and the border security,” Tillis told The Hill.

The Senate’s negotiations are still relatively nascent. The group met for a second time late last week and are planning to meet again this week, with Sen. Alex Padilla (D-Calif.) describing the status as “still no deal but good enough to keep talking.”

Democrats are aware that long-standing divisions over border policy could jam up their talks as they are just getting started.

“It’s complicated by what’s going on at the southern border. If that gets progressively worse, it will soak up all the energy on immigration,” Sen. Dick Durbin (D-Ill.) previously told The Hill.