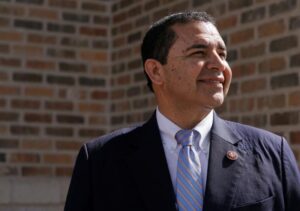 WASHINGTON (Reuters) – President Joe Biden’s hopes of working with congressional Democrats to craft a legislative solution to the rising number of immigrant asylum seekers at the southern U.S. border will hang heavily on moderates like Texas Representative Henry Cuellar.

Cuellar, one of the most conservative House Democrats, has not been shy about warning the new Biden administration that it is moving too fast in reversing some of former President Donald Trump’s tough anti-immigration policies.

“If you don’t stop this flow, like I told the folks at the White House when I was with them, what’s your endgame? … They don’t know,” the Mexican-American representative said in an interview.

Last month, about 168,000 migrants were picked up by border patrol agents between ports of entry along the U.S.-Mexico border, the highest monthly tally since March 2001.

The son of migrant farm workers, Cuellar, 65, is one of a handful of Democrats representing border communities who sometimes find themselves out of step with their party.

Democrats control both houses of Congress by very slim majorities, giving the party’s House and Senate moderates outsized power in dictating the outcome of any legislative efforts.

A bipartisan group of lawmakers is working to save immigration bills passed by the House in March, which face Republican opposition in the Senate, where its rules make it easy for the minority party to block legislation.

The House bills would grant legal status to a large group of immigrants brought into the United States as children years ago and some migrant farm workers. Talks center around expanding the bills to even more workers, while also addressing what many call a crisis at the southern border.

Cuellar, whose Texas district hugs the banks of the Rio Grande River just opposite Mexico, said Biden should reform and not scrap one of Trump’s most controversial initiatives.