Home Politics Bloomberg on immigration, ‘no brainer’ pathway to citizenship 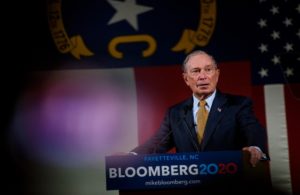 “Well it’s a no brainer,” Bloomberg said. “You give pathway to citizenship to 11 million people.”

He also advocates against deportation, and cites his former jurisdiction of New York City as an example of immigrants feeling safe and “comfortable, regardless of their immigration status, to come and get city services.”

The presidential hopeful also states that while he supports immigration, the U.S. needs to maintain control of its borders. He begins by saying that he thinks “this country [U.S.] needs more immigrants and we should be out looking for immigrants.” Specifically, he outlines the benefits of highly skilled immigrants bringing their talents to the U.S. in a diverse group of industries, such as computer programming and music performance.

However, Bloomberg confirms his stance that separating immigrant families and harming them isn’t a solution.

“At the same time we need to be in control of our borders,” Bloomberg said. “There’s no country in the world that does not have control of its borders or isn’t at least trying to get control of the borders… You can’t rip kids away from their parents, you can’t physically hurt anybody, but you have to have a balance.”

Elaborating on border control, Bloomberg also states that the U.S. needs to improve border security. Alleging that the majority of undocumented immigrants are here on a visa and arrived via airplane, the “wall should really be around the local airport, rather than along the Rio Grande and through some mountains, which is impractical to build.”