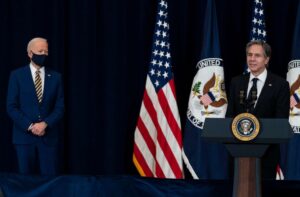 The secretary told ABC News Biden will “revisit” his current cap on refugees.

In an exclusive interview with ABC News, Secretary of State Antony Blinken defended the Biden administration amid a barrage of criticism from Democratic lawmakers and refugee advocates for maintaining a Trump-era limit on refugee admissions for now.

While President Joe Biden pledged to admit 125,000 refugees in the new fiscal year next fall, Blinken wouldn’t commit to a number, telling ABC’s “This Week” co-anchor Martha Raddatz, “Look, the president’s been clear about where he wants to go, but we have to be, you know, focused on what we’re able to do when we’re able to do it.”

That wait-and-see language from Blinken and the White House, citing the “decimated” state of the refugee resettlement program, enraged several prominent Democrats, as well as refugee resettlement agencies who said they are ready to accept Biden’s pledge of 62,500 for the rest of this fiscal year.

“President Biden has broken his promise to restore our humanity. We cannot turn our back on refugees around the world, including hundreds of refugees who have already been cleared for resettlement, have sold their belongings, and are ready to board flights,” Rep. Pramila Jayapal, chair of the House Progressive Caucus, said in a statement.

Some 35,000 refugees have been vetted and approved for resettlement in the U.S., according to the International Rescue Committee, a resettlement agency.

With Biden’s order, those resettlements can begin again, but they will be limited, with the administration saying Friday it would set a “final, increased refugee cap” next month after a few weeks of arrivals and blamed the Trump administration for leaving the program “broken,” in Blinken’s words.