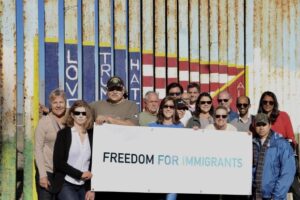 While “finance” to many might conjure a boring system of transactions — or a dangerous game of capitalist exploitation — to financial activists, investment vehicles are fair game for creative and exciting innovations toward liberation. One area of continuous advocacy is the abolition of bail, which forces countless individuals charged with civil crimes to remain in jail simply because they cannot afford their own release. Often, the over-incarcerated and their loved ones have to turn to bail bonds companies that exploit the vulnerability of their financial situations, charge exorbitant interest, and require collateral in exchange for the funds needed for bail. According to the Prison Policy Institute, over 465,000 people are held in local jails every day without being convicted of a crime, simply because they can’t afford their bail.

Bail isn’t just part of the criminal justice system — you might be surprised to hear that it exists in the immigrant detention system, too. Except that in this context, it’s referred to as immigration bond. That’s right, take a second to wrap your head around this: despite committing what should be a civil, not criminal, infraction, immigrants who cross the border seeking a better life are asked to pay bond. Tens of thousands of children and adults are in this position on any given day, stuck in immigrant prisons and jails for years. With the costs of bonds ranging from $1,500 to $250,000, immigrants and their families often cannot afford to pay bond.

Numerous bail funds like the Bail Project, New York’s Free Them All for Public Health, and LA’s Peoples City Council Freedom Fund have historically helped address the criminalization of poverty in the U.S. — and advocates have been working to end cash bail entirely. In the wake of mass arrests of protestors around the country in support of the Movement for Black Lives, many bail funds have experienced an unprecedented surge in financial support.