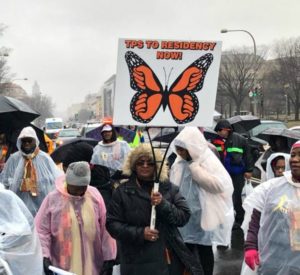 While some media coverage might only focus on immigrants at the U.S.-Mexico border, Black Alliance for Just Immigration (BAJI) is reminding the public that families also have arrived from Liberia, Somalia and Haiti. These families, BAJI says, contribute to the U.S.

Louise Stevens came to the United States in 2000 after escaping Liberia’s civil war. Like thousands of fellow Liberians, she had no choice but to leave everything behind.

“I graduated from school looking for a brighter future, but when the war began, I had to run for my life,” said Stevens, 59. “That’s how I came to America.”

Like so many immigrants who flee war, violence and conflict, Stevens struggled and worked hard to build a life in the United States. She raised a family in the home she owns in Brooklyn Park, Minnesota, and has provided in-home supportive care for vulnerable adults since retiring from medical-device company Medtronic.

But according to the federal government, the life she’s built is only temporary – and Stevens might be deported back to a country she feels she no longer knows.

When TPS expired for approximately 34,000 Liberians in 1999, the Clinton administration moved them to Deferred Enforced Departure (DED) status, which continued to protect them from deportation, but did not create a path toward citizenship. Liberians have been in temporary status ever since.

“Why? Because Congress hasn’t moved to solve the immigration issue,” said Mustafa Jumale, policy manager for the Black Alliance for Just Immigration (BAJI), a grassroots organization that helps African American and Black immigrant communities advocate for racial, social and economic justice. The organization also works for permanent solutions for TPS and DED holders.

The Trump administration has threatened to end DED status, which would send thousands of Liberians, including Louise Stevens, back to a country they no longer know. In March, just days before deportation protections were scheduled to end, the Trump administration announced a second one-year extension while Congress considers remedial legislation. The deadline is now set for March 30, 2020.