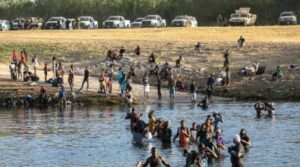 A coalition of advocates for Black migrants on Friday filed freedom of information requests regarding the treatment of migrants from Haiti and other countries who converged under a bridge in Del Rio, Texas, last month.

The requests were filed through the federal Freedom of Information Act (FOIA) and the Texas Public Information Act (by Haitian Bridge Alliance, UndocuBlack Network and African Communities Together.

The groups are seeking details on how federal and state agencies managed the encampment in Del Rio, including questions on how horses and vehicles were used to deter or threaten migrants, and whether any government agencies used water management powers to impede river crossings.

“Although the rapid news cycle means coverage has died down, we continue to be outraged by the anti-Black atrocities happening to Haitian and other Black migrants at the border,” said Breanne Palmer, interim policy and advocacy director of the UndocuBlack Network.

Although the requests could take months to be processed, they’re part of a pressure campaign on the Biden administration, which expelled thousands of Haitians who had sought entry into the U.S.

“To ask for transparency around the horrific treatment of migrants at the border, in particular towards our Haitian sisters and brothers, is to ask for the bare minimum. DHS and the State of Texas owe migrants and the American public much more than that,” said Diana Konaté, policy director at African Communities Together, referring to the Department of Homeland Security and the State Department.

Since Sept. 19, Immigration and Customs Enforcement has sent 61 planes with more than 6,000 people to Haiti.

“We are saddened by the ongoing events occurring under the Biden administration. On the campaign trail, President Biden went to Little Haiti in Miami, Florida and assured the Haitian community that he will be a friend and an advocate,” said Guerline Jozef, co-founder and executive director of the Haitian Bridge Alliance.