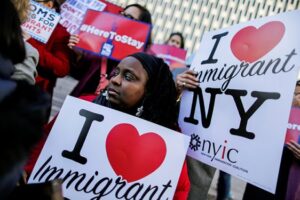 NEW YORK — Two members of the U.S. bishops’ conference migration committee called on Congress to “stop kicking the can down the road” on immigration reform after a unanimous Supreme Court ruled that immigrants who receive Temporary Protected Status (TPS) after entering the country illegally are ineligible to apply for “green cards” to stay in the country permanently.

“This is both ends of the Supreme Court agreeing, and I think they’re basically agreeing on a simple thing of our constitutional order that Congress makes the laws,” Archbishop Thomas Wenski of Miami told The Tablet. “Congress has in the past kicked the can down the road. This is a way of telling Congress to step up to the plate and do your job.”

TPS was created as part of the Immigration Act of 1990 as a way to grant temporary protection to people who can’t return to their home country because of an ongoing armed conflict, environmental disaster, or other extraordinary and temporary conditions. Each designation lasts 6, 12, or 18 months, but can be renewed. The most recent renewal was May 22, when the Biden administration re-designated Haiti for 18 months under TPS.

People granted TPS are not removable from the United States, can obtain employment authorization, and may be granted travel authorization.

Archbishop Wenski cited the fact that when TPS was established it was never envisioned as a pathway to permanent residency. And that those who entered the U.S. legally and then obtained humanitarian protection have always been able to, and still can, apply for nonimmigrant status.

The archbishop, however, laments the fact that TPS status leaves the recipients in limbo once it expires and they’re still in the country.

By John Lavenburg for THE TABLET
Read Full Article HERE