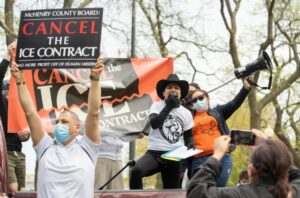 If signed into law, Illinois jails with existing contracts to house immigrants facing deportation would have to end the agreements with the federal government.

The Illinois General Assembly passed the bill, known as the Illinois Way Forward Act, Monday, and it calls for local officials to end existing contracts to detain those in immigration custody by Jan. 1. It would also prohibit law enforcement and state or local government from entering into any similar contracts in the future.

There are three jails in Illinois that detain those in immigration custody. The Jerome Combs Detention Center — about 65 miles south of Chicago in Kankakee — along with the McHenry County Jail — about 62 miles northwest of the city — are among the jails that the federal government pays to detain people in immigration custody. The third jail, the Pulaski County Detention Center, is located in the southern part of the state.

U.S. Immigration and Customs Enforcement said in a statement it doesn’t comment on legislation but the agency will focus on “civil immigration enforcement on the priorities of national security, border security and public safety. [Department of Homeland Security] does not prohibit ICE from apprehending or detaining individuals who are unlawfully in the United States and fall outside of these specific priorities.”

In Kankakee, Sheriff Mike Downey, who oversees the Jerome Combs Detention Center, said officials were looking into the legality of the bill. He said he was concerned about what the change will mean for the safety of officers and the community. He expected Pritzker would support the measure, describing him as an “anti-law enforcement governor.”

“As the sheriff, we’ll continue to do what we think is right to keep our community safe,” Downey said.