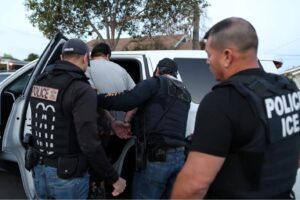 When the Biden administration announced broad new limits on immigration enforcement last year, it offered hope for those fighting deportation.

But so far, some immigrants and their advocates say, the reality is falling short of the administration’s rhetoric.

“We’re a year in, and it’s not working,” says Inna Simakovsky, an immigration lawyer in Columbus, Ohio, in an interview. “I just want them to actually do the right thing, and do what they promised.”

As the Biden administration approaches its one-year mark, there’s mounting frustration among immigrant advocates at what they see as a growing list of broken promises.

Ambitious plans to overhaul the immigration system have stalled. Trump-era restrictions on asylum are still in place at the southern border — including the public health order known as Title 42, which allows authorities to quickly expel most migrants, and the return of a policy that forces some asylum-seekers to “Remain In Mexico” until their immigration court hearings. And the U.S. Department of Justice pulled out of settlement talks over financial compensation for families that were forcibly separated during the Trump administration.

The Biden administration can, however, point to some victories — including detailed guidelines laying out who should be a priority for arrest and deportation, and who should not.

“The guidance recognizes the incontrovertible fact … that the majority of undocumented individuals have contributed so significantly to our communities across the country for years,” Department of Homeland Security Secretary Alejandro Mayorkas told NPR last year.

But immigration lawyers in some parts of the country say the execution of that guidance is not living up to expectations.

“If there’s anyone that deserves prosecutorial discretion, this is the case”

When Simakovsky heard about the new enforcement guidelines, she thought immediately about one of her clients in Columbus. Carol came to Ohio from Africa on a student visa more than 20 years ago, and never left.