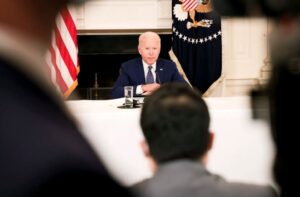 There is a growing gulf between the progressive immigration values President Joe Biden professes and the enforcement policies he’s implementing at the border — and it’s led to confusion among immigration officials, uncertainty for migrants, and questions about whether the president has a coherent strategy on immigration at all.

On the campaign trail, Biden promised a more humane approach to the southern border than former President Donald Trump, whom he described as launching an “unrelenting assault on our values and our history as a nation of immigrants” and “bullying legitimate asylum seekers.”

But during his first year in office, Biden has leaned on his predecessor’s efforts to cut off access to the asylum system on the border more than he admits.

The Biden administration has clung to pandemic-related border restrictions enacted by Trump, known as the Title 42 policy, under which the US has expelled hundreds of thousands of migrants without giving them access to their legal right to apply for asylum. And faced with a recent spike in Haitian migrants at the border, Biden forcibly returned thousands to Haiti despite an ongoing political and humanitarian crisis there.

These enforcement actions create a stark contrast between how the president treats migrants who are trying to enter the US and those already living in the country for whom he has tried to provide a path to citizenship.

And that inconsistency has become a source of strife within the administration. The US special envoy for Haiti recently resigned over the government’s “deeply flawed” Haiti policy. So did a senior State Department official who called the Title 42 policy “illegal,” “inhumane,” and “not worthy of this administration.” Current Department of Homeland Security officials have also described a general lack of direction on immigration.