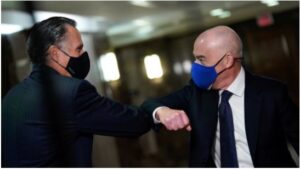 The incoming Biden administration will work “to cease funding for further construction” of the wall along the U.S.-Mexico border, according to Department of Homeland Security (DHS) secretary nominee Alejandro Mayorkas, who told senators Tuesday that U.S. law will dictate whether individuals in migrant caravans are allowed to remain in the United States.

Mayorkas appeared for his Senate confirmation hearing one day after reports surfaced that Biden intends to propose an eight-year path to citizenship for undocumented immigrants shortly after taking office Wednesday, signaling an immediate focus on a topic that has both consumed and paralyzed Congress for decades.

Republican lawmakers pressed Mayorkas on whether the Biden administration would spend $1.4 billion that Congress appropriated late last year to continue border wall construction, one of President Donald Trump’s top priorities that has been fiercely opposed by Democrats, including President-elect Joe Biden.

Mayorkas said he would examine whether existing funds must be spent and underscored Biden’s opposition to further wall appropriations. He did not signal any intention by the incoming administration to tear down wall sections already built.

The hearing came as a caravan of Central American migrants pushes north toward the United States. Republican Senator Mitt Romney of Utah asked Mayorkas if the caravan would be allowed to enter the United States or turned back at the border.

The nominee rejected calls by progressive elements of the Democratic coalition that helped elect Biden to defund U.S. Immigration Customs Enforcement (ICE), an agency within DHS that, among other duties, carries out deportations of undocumented immigrants.