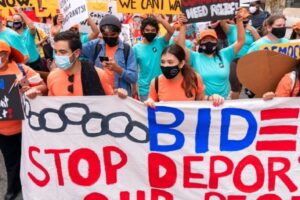 As a presidential candidate last year, Joe Biden slammed the Trump administration’s restrictive immigration policies and pledged to enact comprehensive reform that would reassert America’s commitment to asylum-seekers and refugees. As Biden’s first year in the White House ends, his record on immigration demonstrates as much continuity as change.

In perhaps his most visible departure from the previous administration, President Biden ordered a halt to wall construction along the U.S.-Mexico border shortly after taking office.

But much of the immigration policy architecture of the Trump years endures. The Biden administration has retained Title 42, a pandemic-related policy mandating the rapid expulsion of migrants as a public health precaution, even as America opened its land borders to Mexico and Canada. And a federal court order forced reinstatement of the former administration’s policy that kept asylum seekers on the Mexican side of the border while awaiting U.S. immigration court dates, known as the Migrant Protection Protocols (MPP).

Immigrant advocates say Biden has added some humanity to America’s immigration system but credit him with little else.

“We asked this administration to [end] MPP, Title 42, to release children and families in detention and to start changing not only the narrative but to have a more proactive strategy to rebuild the asylum process at the border,” Fernando Garcia, director of the Border Network for Human Rights in El Paso, Texas, told VOA. “But in practice, we can still see some of the kind of legacy of Trump at the border. That has not changed and we’re disappointed that that is still happening.”