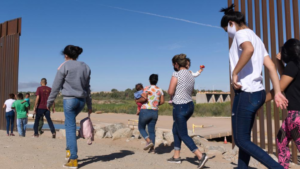 With a “mind-blowing” crisis intensifying on the U.S. southern border, journalists, politicians, and experts are sounding the alarm on an ever-metastasizing and dangerous dilemma.

“I think the first word that comes to mind is just mind-blowing … it was hard to take in the sheer amount of people crossing the border every day,” video journalist Reid Klass proclaims in the documentary. “Seeing it in person makes you realize how astronomical the issue is.”

Biden’s Border, a 60-minute special live-streamed on CBN News YouTube, Facebook, and CBNNews.com, shows how a skyrocketing number of migrants are coming from all over Central America and beyond. These individuals are crossing the U.S.-Mexico border and are then promptly released without U.S. court dates in a beleaguered system that’s growing more overwhelmed by the day.

Biden’s Border offers a shocking lens into the overarching issue, law enforcement’s dire predictions, and the troubling ways landowners and citizens alike are being impacted.

“Little by little, our original Constitution is being ripped apart,” a Texan named Dottie warns in the documentary. “What they go through to protect us and our properties. Without our border patrol, we don’t have a country.”