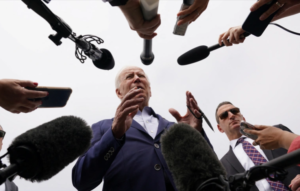 Washington, DC – In a stark departure from the previous administration’s approach to immigration, US President Joe Biden, together with leaders of 20 nations in the Western Hemisphere, unveiled a declaration intended to guide a coordinated response to growing migration pressures in the region.

The Los Angeles Declaration, announced on Friday at the end of the ninth Americas Summit, includes giving aid to communities most affected by migration, expanding legal pathways for migrants to enter countries, humane border management, and coordinated emergency responses.

Migration experts have said the Biden administration’s focus on multilateral regional cooperation and its recognition that migration is a phenomenon that needs to be managed, rather than stopped, is far removed from the stance of his predecessor, former President Donald Trump.

Still, experts have said, there are questions about how the terms of the declaration – which are non-binding – will be executed, and whether the migrant programmes that were announced will do enough to address the needs in the region.

“There are more carrots and fewer sticks,” said Theresa Cardinal Brown, managing director of immigration and cross-border policy at the Bipartisan Policy Center, a think-tank based in Washington, DC.

“There are promises of investment in the region and trying to help countries that are hosting migrants with financial and other resource support,” Cardinal Brown told Al Jazeera.

“But it’s one thing to promise more visas, and it’s another thing to process more visas,” she said, in reference to the US’s inflated backlog of visa applications.

Since taking office in 2021, the Biden administration has sought to reverse Trump’s legacy on migration.

As a candidate on the campaign trail, Trump vilified migrants. As president, he focused on reducing migration in the US by slashing visa and refugee programmes, and building a wall along the US-Mexico border. In 2019, he threatened to impose tariffs on Mexico if it did not do more to stop migrants from travelling to the US.