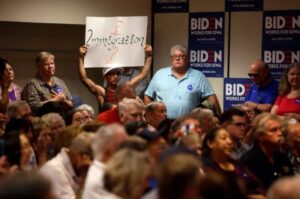 President-elect Joe Biden wants to hit the ground running, undoing President Donald Trump’s hardline immigration executive orders on day one, and producing “comprehensive immigration reform” legislation, to be worked on with Congress during his first 100 days.

But while weary and wary immigration activists count down the days until Biden can erase Trump’s administrative orders, they do not see a large-scale legislative overhaul contained within one bill as a workable strategy any longer.

Previously the gold standard, a bipartisan comprehensive approach to reforming the nation’s immigration laws—essentially one bill to rule them all—has been the Democratic strategy for the better part of the past two decades.

But as Biden again backs trying to negotiate with Republicans, veterans of past immigration battles in the advocacy world said the time has come to move on from a “failed” strategy, they told Newsweek.

“Comprehensive immigration reform is an idea whose time has come and gone,” said Frank Sharry, who worked on the strategy when George W. Bush was engaged and pushing it as president in 2004, along with former Senators Ted Kennedy and John McCain who introduced the bill in 2005.

Activists stressed that they would be foolish to rule out anything more than two months before Biden’s inauguration but cited the number of Republican senators they would need to negotiate in good faith in the post-Trump era as a factor in why they believe the prospects of comprehensive immigration reform (CIR) have dimmed.

Their main beef with CIR, they said, is that Republicans increasingly call for more border militarization and more interior enforcement against immigrants, and the negotiation eventually no longer benefits activists and the community.

“When activists hear comprehensive immigration reform, it’s like PTSD,” said Cristina Jimenez, an immigrant leader and co-founder of United We Dream, who informally advised the Biden campaign on immigration.