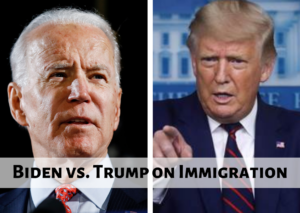 Now that Joe Biden has chosen Kamala Harris as his running mate, let’s examine their stance on immigration. Below is a list of what Biden says he will do in his first 100 days in office. For the most part, this list is comprised of policy actions Biden will take to counter the 400 immigration policy decisions Trump has made during his term.

1. Immediately reverse the Trump administration’s cruel and senseless policies that separate parents from their children at our border;
2. End Trump’s detrimental asylum policies;
3. End the mismanagement of the asylum system, which fuels violence and chaos at the border;
4. Surge humanitarian resources to the border and foster public-private initiatives;
5. End prolonged detention and reinvest in a case management program;
6.Reverse Trump’s public charge rule;
7. End the so-called National Emergency that siphons federal dollars from the Department of Defense to build a wall;
8. Protect Dreamers and their families;
9. Rescind the un-American travel and refugee bans, also referred to as “Muslim bans”;
10. Order an immediate review of Temporary Protected Status (TPS) for vulnerable populations who cannot find safety in their countries ripped apart by violence or disaster;
11. Restore sensible enforcement priorities;
12. Ensure that Immigration and Customs Enforcement (ICE) and Customs and Border Protection (CBP) personnel abide by professional standards and are held accountable for inhumane treatment;
13. Protect and expand opportunities for people who risked their lives in military service;
14. Restore and defend the naturalization process for green card holders;
15. Revitalize the Task Force on New Americans and boost our economy by prioritizing integration, promoting immigrant entrepreneurship, increasing access to language instruction, and promoting civil engagement; and
16. Convene a regional meeting of leaders, including from El Salvador, Guatemala, Honduras, Mexico, and Canada, to address the factors driving migration and to propose a regional resettlement solution.