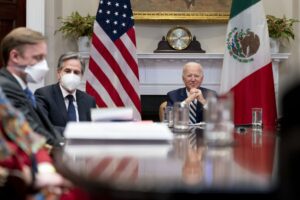 Biden and López Obrador met for a virtual bilateral meeting, with immigration, the coronavirus pandemic and climate issues on the agenda. Looming large was how the two leaders would get along in what has become an increasingly complicated relationship.

“We haven’t been perfect neighbors to each other,” Biden acknowledged in brief remarks at the start of his video conference meeting with the Mexican president.

López Obrador, for his part, told Biden that he was thankful that the new president was “willing to maintain good relations for the good of our people in North America.”

The Mexican president also gave a wink to a rueful observation attributed to José de la Cruz Porfirio Díaz Mori, the Mexican general who served seven terms as the country’s president, about the two countries’ relationship: “Poor Mexico, so far from God, so close to the U.S.”

“I can now say ‘It’s wonderful for Mexico to be close to God and not so far from the United States’” López Obrador said.

Lopez Obrador came to the meeting with his own checklist of priorities, including pressing Biden to give pharmaceutical company Pfizer permission to sell his country vaccine produced in the United States, something that Canada has also requested from the White House.

Obrador told reporters at his daily news conference, hours before speaking with Biden.

Ahead of the meeting, White House officials reiterated that Biden remained focused on first vaccinating U.S. citizens before turning his attention to assisting other nations. Biden, in a brief exchange with reporters at the start of the meeting, said the two leaders would discuss vaccines.