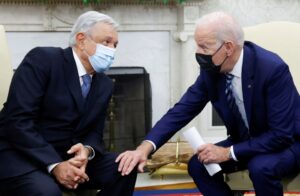 The meeting comes just a few days after a federal judge ordered the Department of Homeland Security to halt its efforts to lift a public health order known as Title 42, a COVID-era policy that allows the expulsion of migrants to prevent the spread of the virus.

The two leaders will also talk about the upcoming Summit of the Americas, which the United States will host in Los Angeles in June and convenes leaders from North, South and Central America and the Caribbean.

The two countries made progress in security cooperation in October with the announcement of the Bicentennial Framework for Security, Public Health, and Safe Communities, but they still face hurdles on issues like immigration and energy.

The administration had planned to end the Title 42 order on May 23 and Republicans have focused on the repeal to attack Democrats over immigration ahead of the midterm elections.

Biden, a Democrat, has struggled to implement what he describes as a more humane and orderly system at the U.S.-Mexico border amid record numbers of migrants arrested while crossing illegally, unfavorable court rulings, and political opposition from Republicans and some in his own party.

The March total is a 24% increase from the same month a year earlier, when 169,000 migrants were picked up at the border, the start of a rise in migration that left thousands unaccompanied children stuck in crowded border patrol stations for days while they awaited placement in overwhelmed government-run shelters.