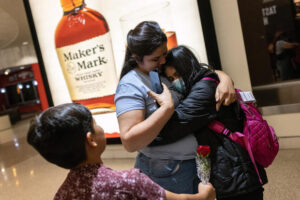 The U.S. government this week will start accepting new applications for an Obama-era immigration policy that allows some U.S.-based parents to bring their children from Guatemala, Honduras and El Salvador to the country legally, the Biden administration announced Monday.

The acceptance of new petitions, set to begin Tuesday, will mark the final stage of the Biden administration’s revival of the Central American Minors (CAM) initiative, which U.S. officials have portrayed as a safe and legal alternative to the often dangerous trek migrant children undertake to reach the southern border.

“We are firmly committed to welcoming people to the United States with humanity and respect, and reuniting families,” the departments of State and Homeland Security said in a joint statement. “We are delivering on our promise to promote safe, orderly, and humane migration from Central America through this expansion of legal pathways to seek humanitarian protection in the United States.”

During the first stage of the revival of this program, which was terminated by the Trump administration in 2017, the U.S. identified over 3,000 pending cases that had been closed because of the termination, administration officials said on Monday. Over 1,400 cases have been reopened but none of the children have arrived in the U.S. so far, officials added.

“We are getting very close to movement on that as well,” one administration official said, referring to U.S. arrivals.

“Tens of thousands” of parents residing in the U.S. could benefit from the program’s full reinstatement, the administration officials noted.

In June, the Biden administration expanded eligibility for the CAM program, allowing parents to petition for their children if they have pending applications for asylum or U visas, which are reserved for victims of serious crimes. Green card holders, Temporary Protected Status (TPS) beneficiaries and others with temporary legal status in the U.S. can also apply.