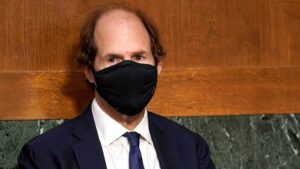 President Biden has been relying on a progressive foe to help his administration look for lasting ways to dismantle Trump-era immigration policies.

Cass Sunstein joined the Department of Homeland Security (DHS) in February as a senior counselor, tapped to oversee and coordinate rulemaking across all of its agencies.

It’s a blow to progressives who are still critical of his tenure leading the Office of Information and Regulatory Affairs (OIRA) during the Obama administration, when they say he stalled much-needed regulations.

This time around, Sunstein and other high-ranking officials are embarking on the monumental task of rolling back around 1,000 immigration measures put in place by the Trump administration.

For an administration that bragged of its deregulatory efforts and forced agencies to strike down two regulations for every new one it put in place, the Trump immigration sphere stands in stark contrast.

“Conservatives and other critics of regulation are loathe to admit that they actually support more regulation when it comes to restricting immigration,” said Amit Narang, a regulatory policy advocate with Public Citizen, a left-leaning group.

“Cass Sunstein might force them to grapple with this blind spot.”

“So the idea that you might need an administrative law expertise at Homeland Security makes complete sense,” he said.

Hauser, however, counts himself among the progressives who were rooting for the Biden team to keep Sunstein as far away from the administration as possible.

But even those who lobbied to keep Sunstein out of the administration begrudgingly see the value he might bring to DHS.