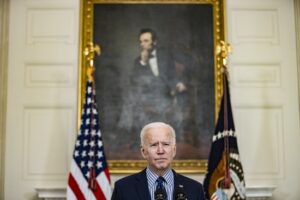 But when the previous administration terminated the policy in 2017, nearly 3,000 children who had already been approved to rejoin parents in the U.S. were left stranded. Biden’s State Department said in its announcement reimplementing the program that the first phase of the rollout would focus on “eligible applications that were closed when the program was terminated in 2017, and the second will begin to accept new applications with updated guidance to follow.”

“Together with other efforts across the U.S. Government, reopening the CAM program is an important step toward expanding lawful pathways for humanitarian protection and opportunity in the United States,” the State Department said. “During the life of the program, we have reunified nearly 5,000 children safely and securely with their families. The program reflects our values as a nation and represents our continued commitment to ensure that our immigration system treats people with dignity and respect and protects the most vulnerable, especially children.”

The Biden administration is reimplementing the program as the number of unaccompanied children coming to the U.S. without parents has increased. This is due to the Biden administration allowing children to be exempted from the Stephen Miller-pushed policy using the novel coronavirus pandemic as an excuse to quickly expel asylum seekers. But that policy unfortunately remains in place for just about all other asylum-seekers (contrary to “open border” lies from congressional Republicans). A small number of families are also being allowed through following the “Remain in Mexico” wind-down.