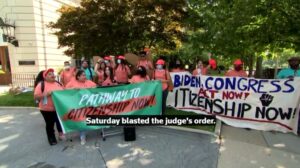 WASHINGTON, July 17 (Reuters) – President Joe Biden on Saturday vowed to preserve a program that protects from deportation hundreds of thousands of immigrants brought to the United States as children, promising to appeal a judge’s “deeply disappointing” ruling invalidating it and urging Congress to provide them a path to citizenship.

U.S. District Judge Andrew Hanen on Friday ruled in favor of a group of states led by Republican-governed Texas that sued to end the Deferred Action for Childhood Arrivals (DACA) program. Hanen concluded that Democratic former President Barack Obama exceeded his powers when he created DACA in 2012 by executive action, bypassing Congress.

People protected under DACA are often called “Dreamers,” based on the name of a proposed immigration overhaul that failed to pass Congress.

Biden said in a statement that the Justice Department will appeal Hanen’s ruling. The Democratic president also said the Department of Homeland Security, which oversees immigration issues, will soon issue a new regulation intended to strengthen DACA’s legal standing.

Hanen, a Texas-based judge appointed by Republican former President George W. Bush, found that DACA violated a federal law called the Administrative Procedure Act when it was created. Hanen said that because large numbers of people are enrolled in the program – nearly 650,000 – his ruling would be put on hold temporarily, but suspended new DACA applications.

“But only Congress can ensure a permanent solution by granting a path to citizenship for Dreamers that will provide the certainty and stability that these young people need and deserve,” added Biden, who was vice president when Obama created DACA.