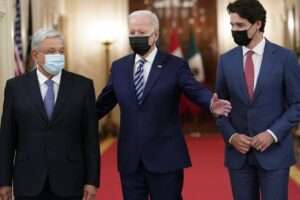 WASHINGTON (AP) — Reviving three-way North American summitry after a five-year break, President Joe Biden on Thursday joined with the leaders of Canada and Mexico to declare their nations can work together and prove “democracies can deliver” even as they sort out differences on key issues.

But as Biden, along with Canadian Prime Minister Justin Trudeau and Mexican President Andrés Manuel López Obrador, spoke of their mutual respect, the three leaders also found themselves dealing with fresh strains on trade, immigration, climate change and other matters.

“We can meet all the challenges if we just take the time to speak to one another, by working together,” said Biden, who hosted the North American neighbors for what had been a near-annual tradition in the decade before President Donald Trump came to office.

It was a day of full-on diplomacy that required careful choreography as Trudeau and Lopez Obrador each met separately with Biden and Vice President Kamala Harris before gathering for a three-way conversation in the East Room that featured a language mix of English, French and Spanish.

The leaders issued a post-summit statement saying they had agreed to collaborate on addressing migration, climate change and the coronavirus pandemic — without specifying how they would resolve their differences.

As they played up the closeness of the alliance, points of tension were also clear.

They include differences between Washington and Ottawa over proposed tax incentives that would benefit U.S. electric car auto manufacturers; frustration from López Obrador that the U.S. isn’t moving to issue more temporary work visas even as American businesses complain they are suffering from a worker shortage; and disappointment by the U.S. and Canada that Mexico is not moving faster to address climate change.

Biden met first with Trudeau, calling the U.S.-Canada relationship one of the easiest in the early going of his presidency. Trudeau said his values are deeply aligned with Biden, but there are issues of disagreement.