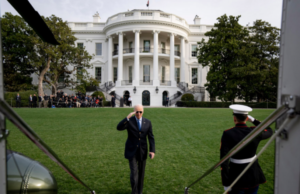 Amid efforts to scrap the controversial, Trump-era ‘Remain in Mexico’ program, President Joe Biden’s powers to set US immigration policy will be scrutinized by the Supreme Court. Launched in 2019, the ‘Remain in Mexico’ policy allowed the Department of Homeland Security (DHS) to send certain immigrants who entered the US back to Mexico.

Returning people to Mexico was done instead of detaining them or releasing them into the US while their US immigration application was being processed. Critics of the policy have described it as ‘inhumane’ and argue that it exposes asylum seekers, with credible claims to remain in the US, to all sorts of dangers and squalid living conditions.

Migrants subjected to the Remain in Mexico policy – also known as Migrant Protection Protocols – have been forced to live in makeshift camps on the US-Mexico border.

Title 42 policy
The Remain in Mexico policy is separate from another controversial Trump-era US immigration policy known as Title 42, which allows US border officials to deny US entry on the grounds of public health. Title 42 blocks migrants from seeking asylum entirely, unlike the Remain in Mexico policy, which still allows migrants an opportunity to apply for asylum in the US.

The Title 42 policy is currently facing separate legal challenges, but a federal judge recently blocked an attempt to end the legislation.

The political fallout over the Biden administration’s attempt to end the Title 42 policy has left the White House in a precarious position and demonstrates the uphill battle it faces in the courts to overturn a series of controversial, Trump-era US immigration policies.

While Biden has personally pledged to end the Remain in Mexico program, so far he has been stifled by federal courts.