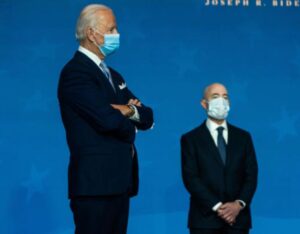 He also plans to propose a broad immigration bill that, if passed by Congress, could legalize millions of immigrants living in the U.S. without legal permission.

But in an early sign that the incoming president could struggle to fulfill some of his bolder campaign promises, Mr. Biden is asking immigration reform advocates for patience, cautioning that his administration and Congress may not be able to pass a large-scale immigration revamp in the first 100 days of his presidency, according to three participants in a meeting the Biden team held with Latino leaders last week.

Mr. Biden and his team cited the ongoing pandemic, the economic downturn and the upcoming Senate impeachment trial as reasons for a likely delay. Participants in the meeting, all veterans of past fights for changes in immigration policy, said the warning is understandable, and they praised the ambitious legislative proposal.

Domingo Garcia, who attended the meeting on behalf of the League of United Latin American Citizens, said Biden’s proposal plan would be “transformative for millions of new Americans.” Hector Sanchez, executive director of Mi Familia Vota, said the plan is “the most progressive I’ve seen” from any president.

But Ramiro Cavazos, the president of the U.S. Hispanic Chamber of Commerce, said he and other participants stressed to Mr. Biden’s team that they still expect action on immigration, despite the other challenges.

“We made it very clear, all of us collectively, that because it’s a new administration and the Senate and the House will be under the control of the same party, that they need to tackle immigration,” Cavazos told CBS News. “We missed that opportunity under President Obama and clearly, over the last four years, Latinos have been under attack.”